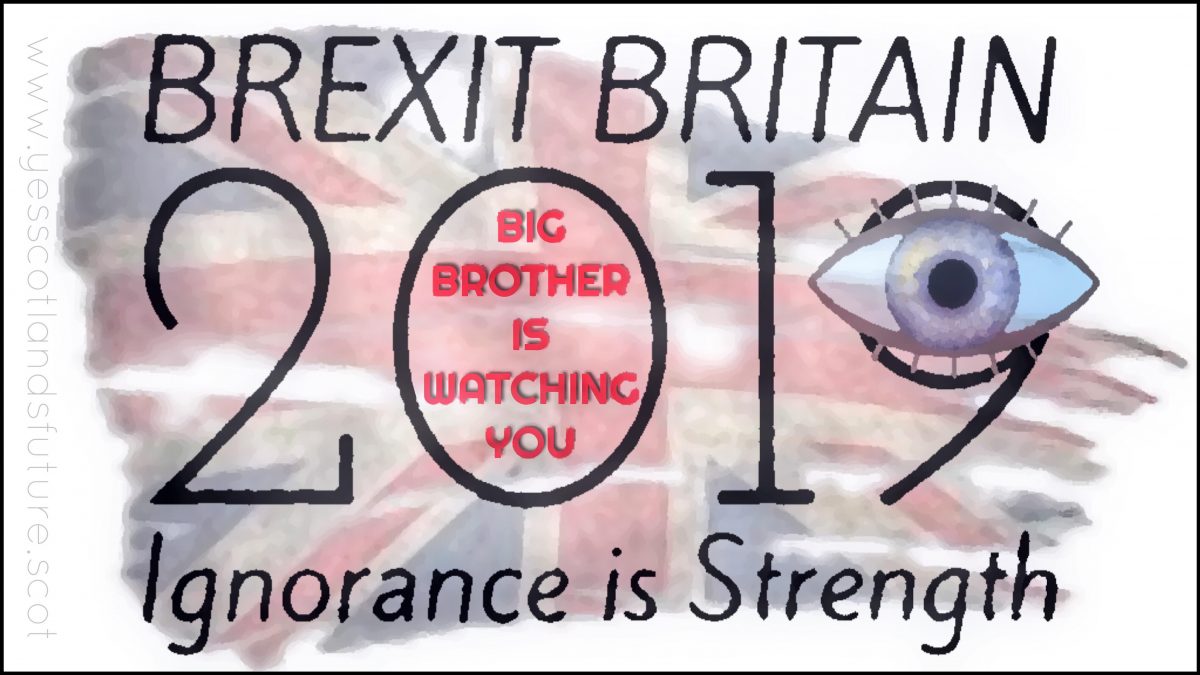 Brexit has been a long term project for the Tories.Its been in the works for a number of years but was escalated when they found out about the changes to EU tax avoidance rules.

One of the most influential dystopian novels ever written, 1984 has had a profound effect on the world. Since its publication in 1949 many of its concepts have entered modern day parlance. Big Brother, doublethink, thoughtcrime, Newspeak and Room 101 are all part of Orwell’s world. What’s more, as a result of the book, Orwellian is now a term to describes official deception, secret surveillance, and manipulation of the past by a totalitarian or authoritarian state. Orwell hoped that by writing 1984 he’d help stop such a state ever coming to pass.

Some would say his vision is only now becoming a reality in more ways than one.

Brexit means Brexit we were told.

We knew it was going to be complex but we were not told Brexit is being used as a convenient smoke screen for a whole number of other plans and schemes. So Brexit most certainly doesn’t just mean Brexit and it never has.

What it has done is allowed the true, deeper nature of politics to be exposed and also to reveal how the state works behind the scenes to hide reality from its citizens.

The process of Brexit will achieve much more for the Conservatives than the Thatcher years ever did.It conveniently blows a smoke screen around a whole number of areas where the Tories would want have a free reign to take money out of the system and allow rampant capitalism to flourish in a virtually tax free United Kingdom.

A tax avoiding haven sitting just off the coast of Europe will outdo the Channel Islands and the Isle of Man. It will become deregulated to extent where ‘anything goes’ and Brexiteers and their pals will not only have new ‘blue UK passports’ but will retain the EU ones through buying them via places like Monaco and Malta so that they can have their cake and eat it.

The government has shown how it works with the media in order to make its job simpler. Like in Orwell’s novel politics is portrayed as serving some higher purpose, but is only an illusion helped in part by a willing mass media.

No ‘higher purpose’ is being served here than to line the pockets of its party donors as the recent Ferry contract shambles highlights. The rules are being broken on a daily basis. It is as if the media turn a blind eye and the script gets rewritten every time there is a blatant gaffe.

‘Doublespeak’ although not actually used in the novel its is closely linked to the concept ‘doublethink’ and ‘Newspeak’ which run through the novel.In modern language it boils down to lying and getting away with it.

In our time, political speech and writing are largely the defence of the indefensible … Thus political language has to consist largely of euphemism, question-begging and sheer cloudy vagueness … the great enemy of clear language is insincerity.

This is where phrases like ‘national interest’ comes in. When we hear it know that there is something going on like a billion pound bung to the DUP to prop up a failing government when they lost their majority after a failed general election campaign.

Speaking of which enter British Labour, stage right or stage left.It doesn’t matter which because all the past hopes of an election victory at a ‘snap’ general election are slipping away for Jeremy Corbyn. Instead of waiting patiently for his big chance at electoral success his party have failed to respond to the pleas of his own supporters in taking a positive stance over Brexit.

Years of abstaining on important issues such as long term austerity measures ( which Scottish Labour still try to blame the SNP for) and avoiding working with opposition parties to put up any kind of fight against austerity will have lost them the next election.

Scottish Labour are also complicit with other Unionist parties in doublespeak. Before the Christmas holidays press outlets were flooded with press releases to ‘keep them going’ over the lean news period. Not sufficient with poorly written and researched press releases Scottish Labour constantly working for their London based superiors came up with a great new wheeze.They organised a demonstration at Central station.

“Doublethink means the power of holding two contradictory beliefs in one’s mind simultaneously, and accepting both of them.”

The fact that the press nearly outnumbered the demonstrators tells you all you need to know. Also the fact that the BBC and STV trailed the demonstration before it happened and reported on it extensively when most other demonstrations in living memory are largely ignored by them and the attendance figures grossly under represented. Well, I am counting about 12 people.Maybe if some smaller people are in the middle, 15 at best. Hardly a mass movement supporting Scottish Labour?

Orwell’s future shock is now clearly recognisable in many aspects of life here and across the world but our future in Scotland is still unwritten. Too many people know that unless we become more engaged and in greater numbers than in 2014 we may end up with no government, being ruled by proxy like a forgotten ‘region’ of a state that never gets what it votes for.

“If you want a picture of the future, imagine a boot stamping on a human face—forever.” 1984

There have been a few articles this week relating to the corporate press and media.The worldwide media where Prime Ministers and Presidents consult with media moguls in the run up to general elections and presidential campaigns.At that level the media literally can make or break governments and change the outcome of democratic election processes. END_OF_DOCUMENT_TOKEN_TO_BE_REPLACED